The meeting location for this project is at the bottom of First St. Louth (AKA First Louth Street on some maps) and Decew Rd. (AKA Jackson Flats) We will be meeting as early as 9AM at this location.

Short Hills Provincial Park is 735 hectares of incredible Carolinian forest that spans through St. Catharines, Pelham and Thorold. It is a popular place for hiking, fishing, bird-watching, cross-country skiing., mountain biking and horseback riding. With so many things attracting human visitors it tends to get very littered.

Over one million years ago a river system flowed north out of Lake Erie into Lake Ontario. As water flowed over the escarpment a gorge was created which recessed southward. Glaciers later scoured the surface and widened the valleys leaving deposits of sand, gravel and clay. About 12,000  years ago the area was flooded when glacial deposits then filled the pre-existing gorge to 150 metres above sea level, leaving behind a network of streams flowing from south to north. These streams cut through the deposited materials, forming river valleys and various waterfalls. 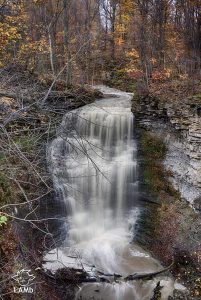 Over time, the water levels in Lake Ontario lowered leaving behind materials on the surface forming the “Short Hills”. As Lake Ontario levelled off  vegetation grew leaving the landscape in its current state.

Short Hills Park is also a part of the 12 Mile Creek watershed, which is the only cold-water creek in the area. As a result, the streams in the park offer a unique fishing opportunity. Some of the fish that may be found include; brown trout, brook trout, hornyhead chub, american eel, rock bass, and the blackside darter.

To get involved at Short Hills Park click here.

If you have a question about this location contact us.

The Short Hills area has been inhabited for at least 12,000 years. Evidence from artifacts found in the region indicate early cultures that lived in the area dominated the Short Hills landscape during the Archaic Period (8,000 to 2,500 years ago),

The area was also occupied during the Woodland Period. Approximately 400 years ago, the Iroquois established large villages to the east and west of the Short Hills.

European Settlers were also attracted to the area for its landscape which became the foundation of the milling industry. United Empire Loyalists were the first permanent European settlers of the area and established two communities of what is now Short Hills Provincial Park; St. John’s West and Decew Town. These settlers cleared much of the land for orchards and built many of the historic buildings in the area.

The park is located in the Carolinian Zone of forests in Southern Ontario and approximately 50% of the parks vegetation is considered to be exotic. It is home to many rare plant species such as sassafras, and black gum trees. It is also home to  black oak, sugar maple, black walnut, white trillium, sharp-lobed hepatia, and wild leek.  One of the most noticeable plants in the park includes the Trillium. Aboriginal People used these plants as food and aphrodisiacs. It was also used in a curse to wish bad luck on enemies. The green part of the plant may be cooked and eaten.