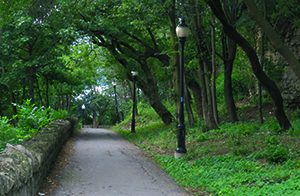 Sam Lawrence Park is located on Concession St at the top of the Jolly Cut. The portion of the Bruce Trail from the Wentworth Stairs to Sam Lawrence Park is one of the most used trails in Hamilton and is very challenging to keep clean. We’ll be meeting at the the paved path at the far East end of Mountain Brow Park West and walking toward the stairs near the edge of the escarpment.

To get involved at Sam Lawrence Park  click here.

Prior to 1944 the land that Sam Lawrence Park is located on was part of the Webb Quarry. In February 1944, The City of Hamilton was given 3 acres (12,000 m2) of land for park use by Thomas Hambly Ross, MP (Hamilton East). The park was originally named Ross Park, then renamed Patton Park in 1946, in honour of captain John MacMillan Stevenson Patton, a Hamiltonian who risked his life during World War II by detonating an unexploded bomb. In 1960 the park was renamed to honour Sam Lawrence. During 1990 to 1994, Sam Lawrence Park underwent a major upgrading that included repairing the stone walls, installing new walkways, site lighting, site furniture, and the redevelopment of the major rock gardens.

Sam Lawrence was born in Somerset, England. He went to work in a quarry at the age of 12 and became a shop steward in the Operative Stonemasons’ Union at the age of 18. He immigrated to Canada and settled in Hamilton with his family in 1912. He joined the Journeymen Stonecutters’ Association of North America and found work as a stonemason. He became involved in the local labour movement and was elected to Hamilton, Ontario City Council as an Independent Labour Party alderman in 1922. He remained on city council and was elected to Hamilton’s Board of Control in 1929, retaining his seat until 1934 when he was elected to the Legislative Assembly of Ontario as the Member of the Legislative Assembly (MLA) for Hamilton East, the first Co-operative Commonwealth Federation (CCF) MLA ever elected in Ontario. He was elected Ontario CCF president in 1941 and served as Mayor of Hamilton from 1944 to 1949. After stepping down as mayor in 1949, Lawrence continued on the Board of Control for six years until his retirement from politics.