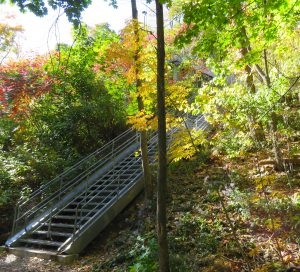 The Hamilton escarpment is not just a beautiful place to hike, it’s also a great place to exercise. Project Kenilworth Stairs & Rail Trail cleans-up one of Hamilton’s favourite places for people to walk, jog and cycle the Rail Trail as well as walk and run up and down one of its five sets of stairs every day. It’s no surprise then, that garbage accumulates – Sometimes its tossed there and sometimes it blows there. After the snow melts away the garbage is unsightly along with being unhealthy for our environment and it’s wildlife.

This area is safe for the entire family to walk along while enjoying a day in nature. 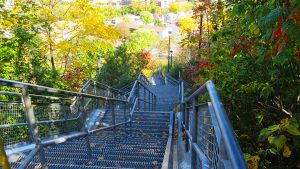 To get involved at Project Kenilworth Stairs click here. 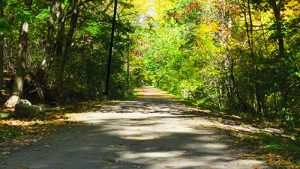 During 1835, a charter was granted to the Hamilton & Port Dover Railway (H&PD) to construct a line between the two communities. Funding was not available and the project remained inactive. In 1853, the charter was revived and the H&PD was officially incorporated. The H&PD succeeded in making the cut in the escarpment face but incurred enormous costs in scaling the Hamilton mountain. Construction of the remaining lines was postponed and the company later succumbed to financial difficulty.

The H&NW merged with the Northern Railway of Canada in 1879, and became known as the Northern and Northwestern Railway (N&NW). In 1888 the N&NW was acquired by the Grant Trunk Railway System. The Grant Trunk had previously acquired the Great Western Railway and numerous other small rail lines. The Grant Trunk went bankrupt in 1919; the Canadian Government placed it under the management of the Canadian National Railway (CN). In 1923, CN assumed control and became the largest railway in Canada. CN maintained active operations on this line for years, and after a period of abandonment, sold the right-of-way to the Region of Hamilton-Wentworth for a dollar. The Region developed the right-of-way into a pedestrian/bicycle trail in 1993.