PLEASE NOTE: This location is in need of volunteers. If you wish to help out please consider this location. 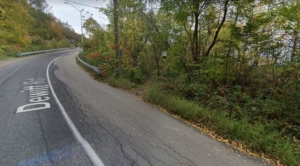 A beautiful portion of the Bruce Trail runs through Stoney Creek along the side of the escarpment where there are creeks and waterfalls. About 50ft from a portion of the Bruce Trail to the West of where it crosses Dewitt Road is a location where people have been stopping their vehicles and dumping litter and debris over the edge of the guard rail for years. Unfortunately this area has been so abused and neglected it actually looks much like a land fill site. We will be meeting at the side of the road and walking in. There is limited roadside parking near the trail entrance or you can park on a side street prior to where the road becomes one way up the escarpment.

While the embankment is somewhat steep for people that don’t have sturdy footing there is also a need for people to carry bags to the roadside along the trail as well.

Raymond Lowes presented his vision of a public footpath spanning the entire Niagara Escarpment in 1960 at a meeting of the Federation of Ontario Naturalists, to friend Robert Bateman

Gaining access to the Niagara Escarpment was the critical first step in building the Bruce Trail.  From 1960 to today, Escarpment landowners have been key to the existence of the Bruce Trail.  Understanding that building relationships was essential, then Trail Director Philip Gosling, visited major towns along the proposed trail route to solicit help. Literately going door-to-door, Philip Gosling and his team of volunteers discussed their vision of a trail along the Niagara Escarpment with landowners. Happily, they were greeted with support all along the way.   Regional Clubs were established by 1963.  Each Club was responsible for organization, landowner approvals, construction and maintenance.