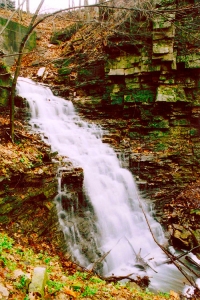 From the bottom of the escarpment you can park in Chedoke Golf Course parking lot and walk westward along the trail to Sanatorium Falls. We will be located at the West end of the parking lot.  See the map below for details on the Project location.

Sanatorium Falls is located almost at the halfway point of the Chedoke radial Trail between the golf course to the East and where the trail meets Scenic drive to the West near the Cross of Lorraine. There is no safe access to the bottom of the falls from the top of the escarpment. In order to access this location it will be necessary to walk along the Radial Trail from one of the parking lots at either end of the trail.

Sanatorium Falls is a tributary of Chedoke Creek below the escarpment which flows into Cootes Paradise. It is approximately 30 ft high and is somewhat of a seasonal waterfall which means there could be impressive water flow during the annual spring clean up.

The Sanatorium was opened in 1906 for tuberculosis patients with the use of a few tents which later became hospital buildings. During the First World War the Government of Canada used the hospital to treat soldiers who returned from war suffering from TB and mustard gas afflictions. 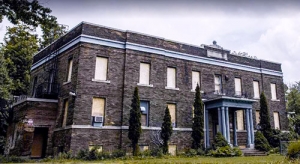 At that time there were concrete steps on the west side of the falls and a bridge across the top which led to a long series of wooden stairs down the east side of the ravine to what is now known as the radial trail. AT the time it was a train stop. This enabled the hospital staff and their families who lived on the hospital site to board the radial train for schooling, shopping, etc. in the city. There are still traces of concrete steps and abutments at the top of the ravine and of concrete columns, which supported the stairs, further down the ravine.

For a history of the Chedoke Radial Trail click here.

The Cross of Lorraine was built on the edge of the escarpment in 1953. The cross was built as a symbol of hope and a reminder of the threat of tuberculosis. It used to be lit up at night but since the land was sold by the city to a private investor it no longer is. 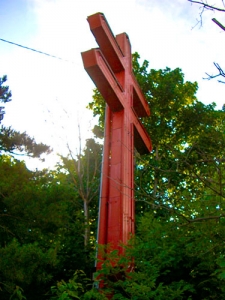