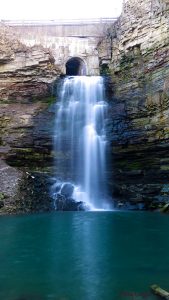 From the bottom of the escarpment you can park in Chedoke Golf Course parking lot. We will be located at the West end of the parking lot. The stairs are well used as is the trail. These are our main areas of focus however there are many waterfall features in the area that also need our help as litter and debris often finds its way there. Its a fun hike. See the map below for details on the Project Chedoke Falls Stairs and Radial Trail.

Chedoke Falls is located in the middle of the city on the top of the escarpment. It has been confined to an underground channel and emerges from a culvert just before reaching the edge. From the top it is located between Upper Paradise and Garth Streets where Scenic Dr meets Denlow Ave. There is no safe access to the bottom of the falls from the top of the escarpment.

Once the waterfall lands, the creek runs to a second set of falls before being forced back underground to accommodate the Chedoke Golf course.

This is just one of several creeks that have been diverted underground which run through lower Hamilton.

Also included at this site are Westcliffe and Cliffview Falls just to the West of the stairs.

For many years, electric interurban or “radial” railways provided passenger and freight service between Hamilton and the neighbouring communities of Ancaster/Brantford, Grimsby/Beamsville, Burlington/Oakville, and Dundas. Four lines, totaling 78 miles of track extended outward from Hamilton. The Chedoke Radial Trail was developed on the area’s fourth and final radial line, the Brantford & Hamilton (B&H) Electric Railway.

Construction of the B&H line began in 1906. Hundreds of tons of rock were blasted from the face of the escarpment to create a ledge for the track. Some of the rock was used to fill the Chedoke Falls ravine. The line extended from Main and Hess Streets, extended along Hess, continued along a private right of way just beyond Herkimer Street, then climbed the mountain. 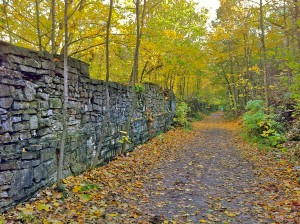 Competition from automobiles, buses and trucks brought an end to the radial system and in 1931 the B&H made its final run. The tracks were removed in 1932 and some consideration was given to converting it into a highway. (A wall was erected along the trail  to protect passengers from bullets ricocheting from the rifle range below the escarpment. It remains to this day.) Eventually it came under the control of Hamilton’s Board of Park Management, which sold some portions for housing in the 1950s.

On February 23, 1993, Council gave approval to develop the pathway from Hillcrest to Scenic Drive. In 1995-1996, the heavily used existing pathway between Dundurn Street and the Chedoke Golf Course was extended and seating areas were built at the bottom of the Dundurn Stairs and at the parking lot on Scenic Drive. Funding for this development was shared equally between the City of Hamilton and the Province of Ontario (through the Waterfront Regeneration Trust)

The Chedoke Radial Trail was officially opened on May 25, 1996, to coincide with the first anniversary of the Lake Ontario Waterfront Trail.