PLEASE NOTE: This location has enough volunteers. If you wish to help out please consider another location so that our clean up efforts will be more effective and your skills/time better utilized. 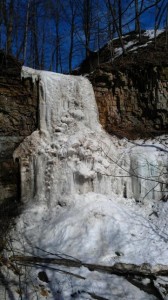 A beautiful portion of the Bruce Trail runs through the Dundas Valley along creeks and near waterfalls. Three of the waterfalls belong to the Sydenham waterfalls system; Sydenham Falls, Middle Sydenham Falls and Lower Sydenham Falls. They are found in close proximity to each other along Sydenham Creek near Sydenham Road. About 50ft from a portion of the Bruce Trail are a couple of areas in need of clean up. One is a popular hangout for youths and is unfortunately covered in litter. The other is near the sound barrier fencng where someone has left various construction materials that need to be removed. These are the areas we will focusing on. We will be meeting at the corner of Melville and Brock Streets in Dundas.

To get involved at Bruce Trail – Dundas click here.

These waterfalls are named after Baron Charles E.P.T. Sydenham, Governor-General of Upper Canada from 1839 to 1841. Born at Waverley Abbey, near Farnham, Surrey, Thomson was the son of John Buncombe Poulett Thomson, a London merchant, by his wife Charlotte, daughter of John Jacob. His father was the head of J. Thomson, T. Bonar and Company, a successful trading firm that had dealings with Russia. After attending private schools until age 16, Thomson entered the family firm at Saint Petersburg. In 1817 he came home due to poor health and embarked on a prolonged tour of southern Europe. He returned to Russia in 1821 and over the next three years travelled extensively in eastern Europe. He established permanent residence in London in 1824 but frequently visited the Continent, especially Paris.