Battlefield Monument is one of the most well known landmarks in Hamilton. It is part of the historic Battlefield House Museum & Park located just below the escarpment at Centennial Parkway and King St W. in Stoney Creek.  Battlefield Creek runs through the park from Billy Green Falls.  The area we will be focusing on is a small area in the forest along the Bruce Trail where people have left the remnants of several tents and other trash. We expect this location to be a fairly fast clean up.
There are three easy ways to get here:
1 – You can follow Battlefield Dr southward from King St to Alba St and park on the road, then follow the trail from the West end of Alba St.
2 – You can follow the Bruce Trail from Devil’s Punchbowl which will lead you to the area. (a 15 – 20 min scenic walk)
3 – You can park in the parking lot and walk to the back of the park at the escarpment. 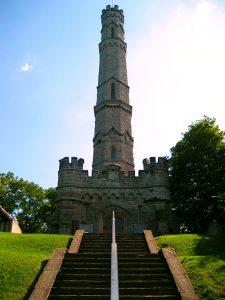 On June 5, 1813, American forces marched from Niagara and set up camp. In the early morning hours of June 6, 700 British troops marched from Burlington Heights – where Dundurn Castle stands today – and defeated 3,000 American soldiers under the cover of darkness. The Battle is considered a turning point in the War of 1812 as the Americans, who occupied Fort George at the time, never penetrated as far into the Niagara Peninsula again