Wow!! is the easiest way to describe it. The 2017 Escarpment Project clean up and BBQ/Festival will definitely go down in history as one of the most memorable. After an early morning thunderstorm it was debatable whether or not the event would even take place. Add to the mix some frigid April temperatures and high winds which made it feel like -6C and it was even more doubtful.
That didn’t stop over 400 volunteers from taking to the trails and waterfall areas of the escarpment from Dundas through Hamilton & Stoney Creek to Grimsby, in order to remove the litter and debris that had been left there.

Aside from the weather, other challenges faced this year’s clean up initiative including some good samaritans who prior to the day, got a head start on cleaning some of the areas The Escarpment Project intended on cleaning. We were able to finish what they had missed and rerouted people to other locations. In the end, thanks to everyone’s efforts, more area than in previous years was cleaned leaving the escarpment cleaner than ever. 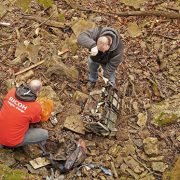 After getting soaked & muddy, volunteers went to the volunteer appreciation BBQ at Punchbowl Market where they were treated to a BBQ which included burgers, sausage, pizza, chicken, pop, water, coffee and beer. Two local artists, Robin Benedict and Brad James both performed music sets to entertain the hundreds of volunteers who showed up to celebrate a fantastic albeit chilly day and a job well done.

Members of the community were also able to take part in the celebration and buy rain barrels as well as drop of items for recycling (scrap metal, batteries, tires, paint and electronics) in an effort to divert these items from being dumped in the environment.

Thank you to the hundreds of volunteers who braved the elements and came out to help clean the escarpment. You are truly inspiring and a testament to the people of Hamilton and Grimsby.

Watch the video of the event.

We are already beginning to plan for next year’s annual clean up and hope you’ll join us for some of our smaller clean-up activities throughout the rest of 2017.

Thank you again Hamilton and Grimsby. You ROCK!