After several years of cleaning the escarpment we thought we’d put together our very own list of the Top 10 Hamilton Waterfalls. Before we tell you our top 10 waterfalls we’d like to remind you to help keep these areas clean and litter free;
by carrying out everything you carry in, by joining us on our next clean up or by clicking here and donating some money to help with our annual clean up initiative.

Thanks up front to Dave de Jong for supplying many of the beautiful photos of waterfalls you are about to see. We hope you enjoy looking at them as much as we did when we created the list.

With over a hundred waterfalls in Hamilton to choose from this was no easy task so here are a few honourary mentions that are special waterfalls but didn’t make the Top 10 Hamilton Waterfalls list. Let us know what your favourites are when you are done. 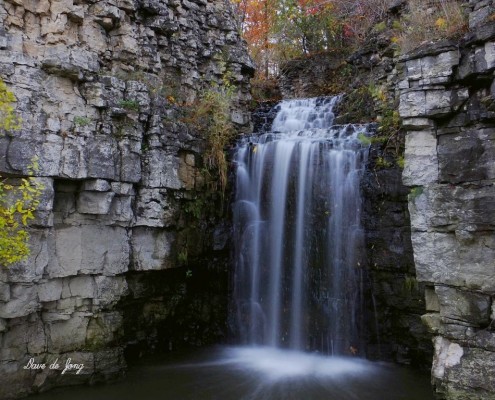 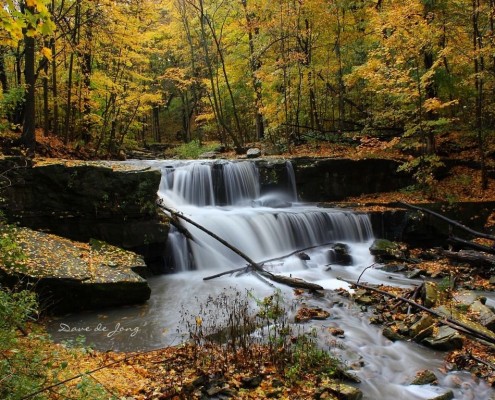 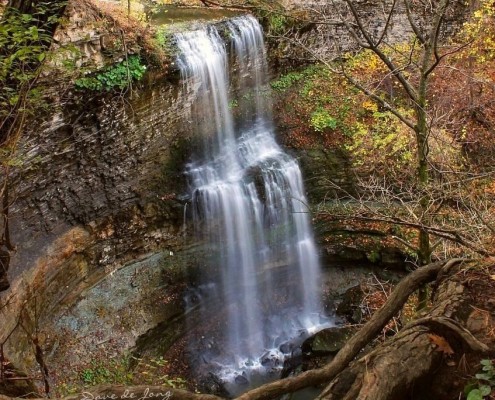 Buttermilk Falls could be considered a hidden gem but it’s far from hidden as it sits under a bridge on Mountain Brow Blvd near Limeridge Rd on the East mountain. It is more correct to say it is just overshadowed by the more popular Albion Falls which is less than 1 minute up the road by car. Buttermilk Falls is approximately 75 feet high (23 metres) and runs almost year round. In late summer, early fall or at times of very little rainfall the flow slows to barely a trickle. It flows into a tributary of Red Hill Creek.

We chose this waterfall as number 10 on the list because of the beauty of the foliage surrounding the gorge that it is in and how secluded it is. It is about a 20 minute hike from the Red Hill Valley Trail by foot or a 2 minute descent down the escarpment cliff face.

Just in case you were wondering Felker’s Falls was a close 11th on the list. 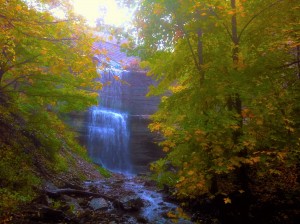 Borer’s Falls is a 49 foot (15 metre) waterfall that runs into Borer’s Creek which is a tributary that feeds the west pond of Cootes Paradise. It’s surrounded by lush, green trees and vegetation in the summer months and has a tremendous flow during the wetter months. It usually runs year round but can slow to just a trickle during drier times.

Like other waterfalls in Hamilton it used to provide water to power a sawmill in Rock Chapel Village. This mill was run by the Borer family. After years of land clearing the creek’s flow slowed to the point where it could no longer power the mill. 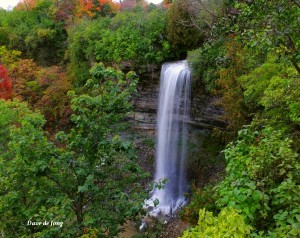 Great Falls is 32 feet (10 metres) high and is also known as; Waterdown Falls, Smokey Hollow Falls, Boundary Falls and Grindstone Falls. It’s a little, picturesque and powerful waterfall that feeds Grindstone Creek which is a fast flowing, rocky creek that is a tributary to Lake Ontario.

When hiking alongside the creek through the valley you would never know you were this close to a city as you find yourself surrounded by an abundance of plant and animal life. You are bound to see deer on any given day. Grindstone Creek flows through the valley for several km past the Royal Botanical Gardens before it empties into Lake Ontario just East of Plains Road.

As its names suggest, Grindstone Falls was used to supply power for industry in the 1800’s in Waterdown, in the area known as Smokey Hollow.

It’s hard not to include something with the mystique of the name Smokey Hollow in our top 10 waterfalls list. 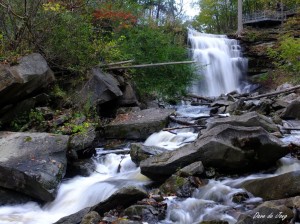 Sherman Falls is 55 feet (17 metres) high and flows year round into the Ancaster Creek tributary system.

It is a quaint waterfall surrounded by trees. There is a wooden bridge in front of it that crosses the creek. The bridge is a very enjoyable place to stand and lean against the hand rail while listening to the pleasant sounds nature provides and watching the falls, or the creek flow beneath you. It is gorgeous in autumn when the fallen leaves carpet the landscape around it.

Sherman Falls is only minutes from where Lions Club Road meets Old Dundas Rd. in Ancaster, so it is a fantastic place to go for a little taste of nature.

It was named for Clifton Sherman, an American, with years of experience in foundry management. He established the Dominion Foundries and Steel Co. (Dofasco) in 1912 and owned the land where the waterfalls are. As a result the Sherman family became well known in the community and the waterfalls adopted the name. 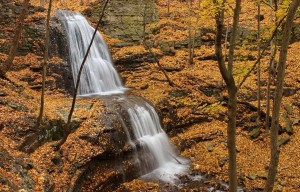 The number 6 waterfall location on the list is Chedoke Falls.

Chedoke is fed via an underground creek on the West Hamilton escarpment and falls 59 feet (18 metres) into Chedoke Creek below, then returns underground below the Chedoke Municipal Golf course before reemerging near the 403 and flowing into Cootes Paradise.

This waterfall slows when there has been a decrease in rainfall but flows year round. The pool of water directly below the falls appears turquoise and is surround by cliff face on almost 2/3 of it. Some of the cliff rock has eroded at the waters’ edge which has created a slight overhang and a very unique and attractive look.

Chedoke Falls is one of the most challenging waterfalls to get to from below. The terrain is very rocky and steep. You also pass two other waterfalls on the way. Lower Chedoke Falls and Denlow Falls. Depending on the whether it can be a treacherous hike. 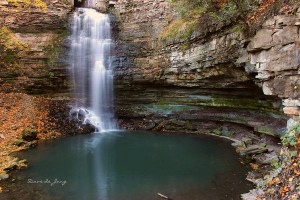 Tiffany falls is number 5 on the list because of sheer elegance. It’s a very pretty waterfall that can be accessed from Wilson Street in Ancaster. It is 68 feet (21 metres) high and is another waterfall that takes just minutes to walk to from the road for a quick burst of nature during a stressful day to help you unwind. There is a viewing platform in front of it and walking bridge to cross that is perfect for this.

If you follow the creek above the waterfalls you will run into Washboard Falls. It is frowned upon to go there because in order to do so you have to climb the side of the cliff and will destroy the plant life which is already endangered as a species.
In times of inclement weather people also get stranded above the falls and Hamilton’s emergency services must bring them down. 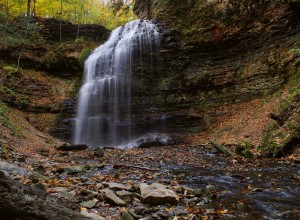 At 62 feet (19 metres) Albion Falls is one of the most majestic waterfalls in Hamilton thanks to the steep cliff face and tree coverage.

It’s located where Mountain Brow Blvd meets Mud St. and can be accessed from above via a short stairway at this location. The large boulders on the bottom add to its majesty. In summer many people visit the waterfalls and bask in the sun on the boulders. It’s easily accessible from the top and bottom which also makes it one of the most visited. Because of these factors it has also had more rescues than any other waterfalls in Hamilton. It appears very easy to climb but for some reason some people throw common sense out the window.

Albion Falls flows year round into Red Hill Creek and is joined by a tributary from Buttermilk Falls as it twists, turns and meanders before ending in Lake Ontario.

When Hamilton’s Red Hill Parkway was built the Red Hill Creek was actually moved to its current location which is where it had been a million years earlier. As it goes when challenging mother nature, the creek sometimes overflows in it’s new, old location, flooding surrounding land and roads in times of extremely high rainfall.

Albion has a rich history with a mill which you can still see remnants of. For more on it’s history click here. 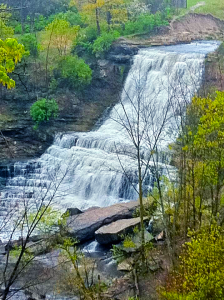 The number 3 waterfall on our list is the second of two waterfalls that makes its home in Dundas’ Spencer’s Gorge.

At 72 feet (22 metres) Webster’s Falls is far from the tallest but it is of incredible beauty. The creek meanders and flows over the edge before crashing into Spencer Creek. The bridge over Spencer Creek before the waterfall adds a lot to the elegance and charm of Webster’s Falls.

This waterfall has been a favourite for many people to visit for day picnics with family and friends. Hiking in from the bottom can be a bit of a chore but a fun hike nonetheless.

Picnicking with family and friends while surrounded by elegance and charm is why Webster’s Falls was chosen as #3 on our Top 10 Waterfalls of Hamilton list. 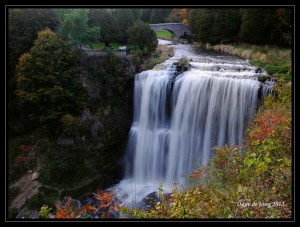 The number 2 waterfall location on our list is the spectacular Tews Falls.

Tews Falls is the highest of all the waterfalls in Hamilton and falls 135 feet (41 metres) into Logie’s Creek in Spencer’s Gorge. It is only a few metres shorter than Niagara Falls and offers spectacular vistas of the gorge. The water flows year round with the exception of times of very little rainfall when the flow has been known to stop.

There are 2 viewing platforms to view the falls and gorge from above. This is one of the busiest waterfall areas in Hamilton thanks to its fabulous location above the gorge enroute to the Dundas lookout. Hiking in from the bottom is a real treat. It’s about a 30 minute hike along the trail through the valley, alongside the creek. If you look close enough and you know where to look you will find trees here that are 1000 years old. 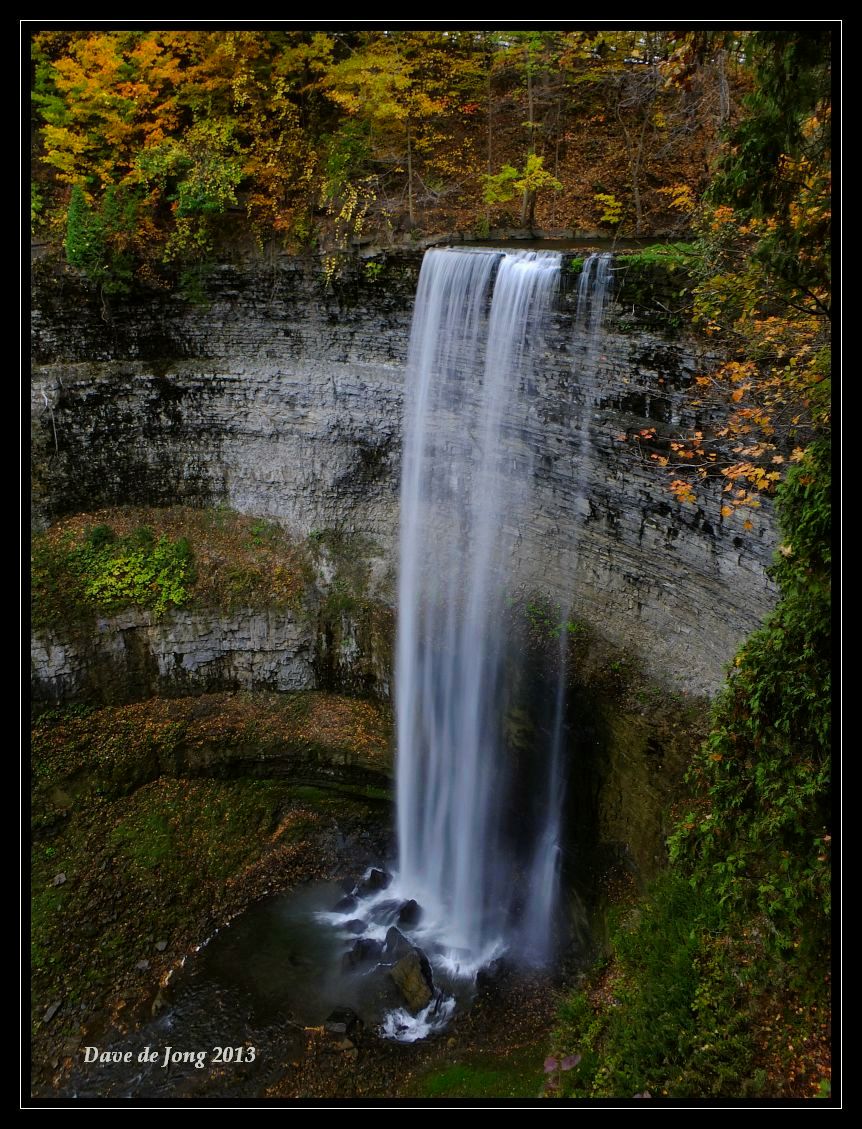 Sitting high up in Stoney Creek is the number 1 waterfall on our Top 10 Hamilton Waterfalls list. At 121 feet (37 metres)  it is the bookend of the East that matches Tews Falls in the West.
While the gorge this waterfall flows into may not have the lush foliage as other waterfalls, this waterfall was chosen as number 1 on the list for several reasons; 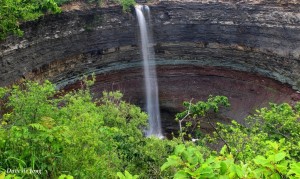 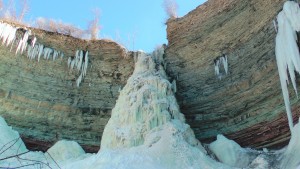 Successful Interim Clean Up in Dundas