News & Blogs
You are here: Home / The Escarpment Project Annual Clean-up / News & Blogs / In The News / Successful Interim Clean Up in Dundas 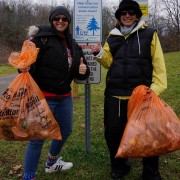 It was a chilly morning this past Saturday, Nov 28th, in Dundas but that didn’t stop waterfall fans, hikers or nature enthusiasts from showing up to remove litter from the trails and waterfall areas in the Dundas valley.
Just over 30 volunteers got together at Cascades Park and hiked to various locations including; Dundas Peak and Sydenham, Tews and Websters Falls areas. Business owners, families with kids, students  and other individuals showed up to lend a hand in keeping their part of the escarpment clean. Neighbours and people driving by in their vehicles were also very supportive  as they took time to stop to say, ‘thank you’ as they went about their day.

Ine Wauben, who is the 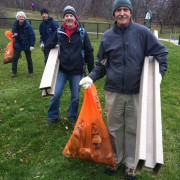 Escarpment Project’s team leader for this area and Director of Corporate Sponsorships, put the event together after noticing the increased litter due to a higher volume of trail users this past summer. It is hoped that this clean-up will reduce the amount of litter and debris that will need to be removed from the area during the Escarpment Project’s annual spring clean up event. Most of what was removed were smaller items such as; water bottles, cans and coffee cups but  a few larger items were also removed such as; lawn chairs, memory foam bedding and broken fencing. There was enough garbage removed in the short span of time that the clean up lasted to fill the back of a pick-up truck.

Thanks to all the volunteers who braved the weather and helped out.

The Escarpment Project annual clean-up is on the last Sunday of each April and is next scheduled for Sunday, April 24, 2016. 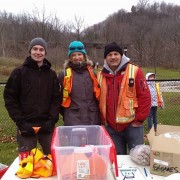