With the first weekend of April behind us there are now less than 3 weeks remaining until The Escarpment Project cleanup on April 27th. There was certainly a lot of excitement in the air over the weekend as there were more than 20 connect-with-nature programs taking place as tweeted by The Nature Conservancy. 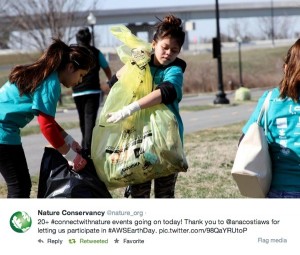 Expect to see more cleanup projects throughout April as we lead up to The Escarpment Project cleanup on April 27th.

More corporate teams are signing up to lend a hand for this year’s Escarpment Project including; Starbucks, CIT Leasing and ArcelorMittal Dofasco. Other organizations like The Bruce Trail Conservancy, Scouts Hamilton, Green Party of Hamilton, Hobbitstee Wildlife Refuge and Beta Sigma Phi Sorority have signed up. Students from high schools such as; Glendale, Sherwood, Saltfleet and McKinnon Park in Caledonia have also put together teams. This year’s Escarpment Project is also gaining more momentum in the media with updates from radio stations such as KX947 and articles being published in newspapers across Hamilton like one published in this past Friday’s online edition of  Hamilton Community News. It will be delivered to your door or on news stands this week.

Several blogs have also been created by people who are putting teams together such as;
Volunteer Hamilton and hiking groups from Toronto and Hamilton. If you would like to join a team you can click one of their links below or create your own and just let us know your coming so we know how many supplies we need.

We look forward to seeing you April 27th!